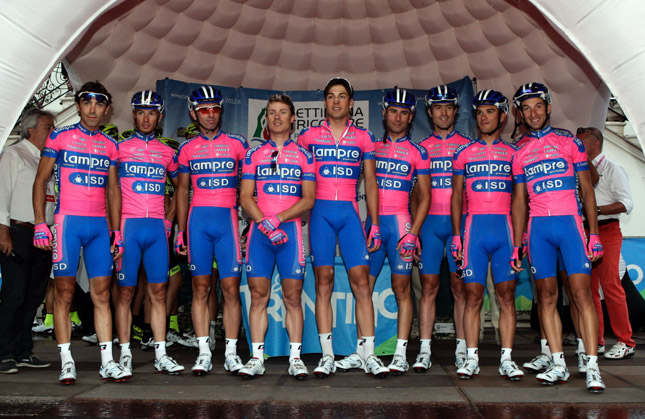 Scarponi was a top protagonist of the Italian road championship, 254,7 km from Pergine Valsugana to Borgo Valsugana, thanks to an attack that allowed him to lead the race, for first with other 12 athletes and then lonely, for almost 120 km.
The leader of Lampre-ISD (11 riders at the start, photo Bettini) a group of 12 attackers (also blue-fuchsia rider Cimolai in this group) 131 km after the start, then Scarponi attacked on Telve climb at 50 km to go and so he was a solitary leader until the approaching to penultimate passage on the arrival (15 laps of the final circuit of 13,8 km), when he was joined by Nibali, Moser, Caruso, Di Luca and Pellizotti.
Lampre-ISD’s climber could not compete on the last passage of Telve climb against the attack performed by Pellizotti, who reached lonely the arrival. Scarponi was 6th.
For what concerns the other Lampre-ISD’s cyclits, also Bertagnolli, Mori and Marzano completed the race, while Cunego withdrew after 200 km.

“I joined the breakaway while I was following an attack by Oss, then the gap on the bunch increased and so I understood that that could be an interesting action - Scarponi said - After the very effective support by Cimolai, I decided to make a my own move and I confess that I believed it could be a winning action. Unluckily, Moser led the chase in a very intense way, then I could not be competitive any more. Good signs in view of my next races”.

“We tried to surprise the opponents with an anticipated attack by one of our top rider, Scarponi, who was having good feelings and he could be very competitive during his attacking action - sport director Maini explained - I think his race was very valuable, we miss the big target but we showed good things, also in view of Scarponi’s next appointments”.

This is Cunego’s comment: “As I said in the eve, I knew my energies were almost over after an intense first part of the season, so my aims were not so high. During the race, I tried to manage myself in order to go on as far as I could, but then I had to give up. Now, I’ll take a rest period”.