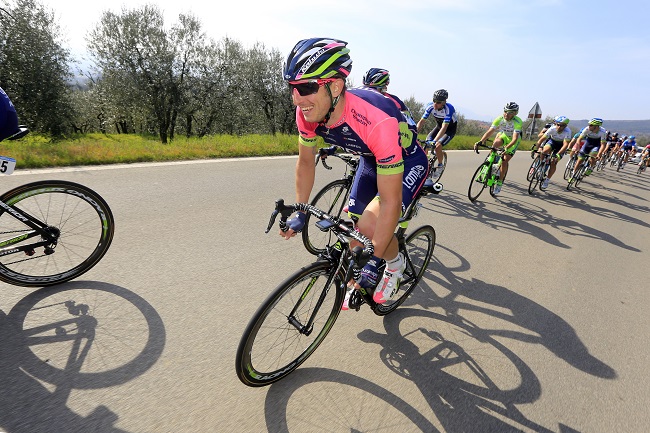 Unlucky day in Tirreno-Adriatico for LAMPRE-MERIDA.
In the morning, Horner had quit the race, not taking part in the 6th stage (Bucchianico-Porto Sant’Elpidio, 189 km), but blue-fuchsia-green team was willing to perform an impressive stage with Modolo and Ulissi.

After few kilometers in the race, Ulissi crashed, without heavy consequences (he completed the stage in 27th position); later, while approaching the sprint, Modolo (photo Bettini) fell to the ground at 1500 mt, while he was following Cavendish’s wheels.
After this crash, no LAMPRE-MERIDA rider could enter the top ten of the stage classification.

“I was aware today massive sprint would have been frantic, because everybody would have wanted to fight in the last sprint of this race - Modolo explained - That’s why I preferred to move earlier than usual to reach the head positions of the bunch.
Unfortunately, I crashed and I lost every chance.
I’m sorry, especially for my team mates that had given me once again a perfect help during the stage and in the final part of the race.

The good news is that I did not suffer injuries in the crash: I’ll be ready to face the next very important challenge“.

A 9,1 km in San Benedetto del Tronto will end Tirreno-Adriatico: Diego Ulissi, who’s 13th in the overall classification, will try to be in the top 15. He’ll defend 1’29″ of advantage on  Hermans (16th).

This entry was posted in Tirreno-Adriatico. Bookmark the permalink.

What a great time trial for Ulissi

Unlucky day in Tirreno-Adriatico for LAMPRE-MERIDA. In the morning, Horner had quit the race, not taking part in the 6th stage (Bucchianico-Porto Sant’Elpidio, 189 km), but blue-fuchsia-green team was willing … Continue reading →