Serpa, a days as a lion; Rui’s word after the withdrawal 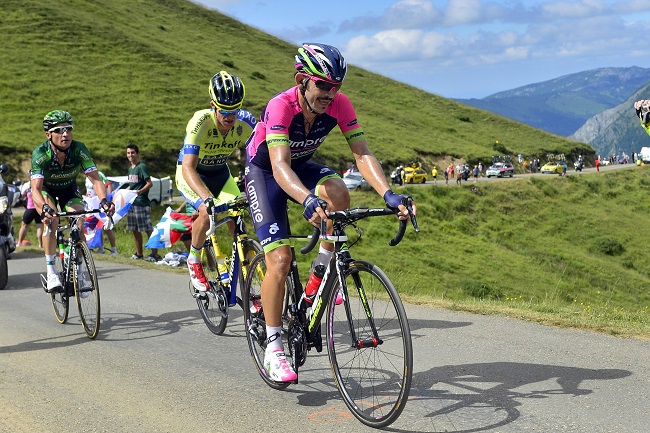 Josè Serpa is nicknamed the “Lion from Bucaramanga” after his grind and dignity, that are qualities he demonstrated once again during the 16th stage of Tour de France, the longest one of 2014 edition of the Grande Boucle.

The riders covered 237,5 km from Carcassonne to Bagneres de Luchon, with the demanding climbs of Portet d’Aspet, of Col des Ares and of Port de Balès.
The key moment of the stage was the attack of 21 riders after 30 km in the race: Serpa (photo Bettini), who is supported by a good condition, could be a member of the breakaway that could have a maximum advantage on the bunch of 12′.

The Colombian climber from LAMPRE-MERIDA succeeded in being always in the head of the race, while the breakaway group was gradually selected by the course. Serpa reached for first the summit of Port de Balès, at 21,5 km to go, just before approaching the donwhill to the arrival with Rogers and Vockler, that were few kilometers later joined by Kiryienka and Gautier.
At 4 km to go, Rogers made the winning attack and the other breakaway mates could only sprint for the second place: Serpa was 4th.

“I was aware I was the strongest on the climbs, but it would have been an hazardous move to attack when there still were more than 20 km to the arrival - Serpa explained - Everyone know Rogers was the favourite and I tried to pay attention to every movements he did, but it was not possible to follow him when he attacked: once he had more than 10 meters of advantage, it’s impossible to chase him.
It’s a pity I could not exploit this occasion to give my team a satisfaction after tht Rui Costa quit the race”.

The world champion, who did not start today stage because of an outbreak of pneumonia, said these words to comment his withdrawal:

“Yesterday, during the rest, day, I pedaled in a light training but, when I came back to the team hotel, I had bad feelings and I started suffering for temperature and muscles pains.
I went to hospital and X-ray examination showed an outbreak of pneumonia.

I wanted to wait until this morning in order to evaluate my condition, but today my health  situation has not changed , I’m feeling even worse, as  a truck hit me.

Luckily, also thanks to Doctor Beltemacchi, we could understand in time the seriousness of the situation.

I would have liked to go on in Tour de France, in order to honor such important race and to try to give satisfactions to my team and my fans, but it was necessary to quit the race in order to avoid even more serious health problem“.

A very good team spirit allowed LAMPRE-MERIDA to realize a positive performance in Vattenfall Cyclassics in Hamburg (245,9 km). Despite the fact that the team key rider, Sacha Modolo, was … Continue reading →

Valuable performance for LAMPRE-MERIDA in the opening team time trial of Vuelta a Espana 2014. The blue-fuchsia-green team (photo Bettini) obtained the 10th place, at 25″ to Movistar, that win … Continue reading →