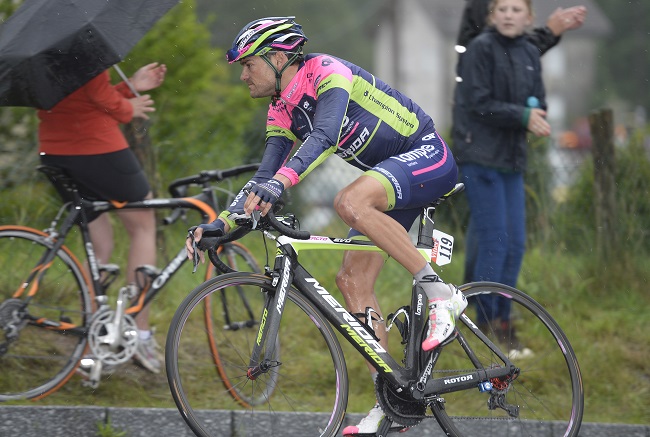 Rafael Valls, who is awaited to good performances on the climbs of Tour de France after he demonstrated in Tour de Suisse to be very competitive on the mountains, spent almost the whole 9th stage of Tour de France (270 km from Gerardmer to Mulhouse) pedaling in the breakaway that led the race.

As by reccomendation by the team’s sport directors, the Spanish climber (photo Bettini) paid attention in the early kilometers of the stage to the various attempts of escaping, joining the biggest one that counted 30 members.
The bunch gave freedom to this breakaway that could get a good advantage: during the stage, Tony Martin counter attacked and he reached the arrival for a solo victory.
Valls finished the stage in the first chasers group, obtaining the 13th place at 2’45″ to the winner.

The yellow jersey bunch reached Mulhouse 7’46″ later, that means that Gallopin, who was in the breakaway, is the new leader of the race.
Rui Costa is now 11th, since Machado, Rolland and Gallopin overtook him.

“It was important to race carefully in order to avoid problems in the downhills of the six Kom of the stage - sport director Matxin explained - We achieve this goal, as Valls did in the best way his assignment of joining breakaways if they would have count a large number of riders: Rafael demonstrated that the team can rely on him for the next stages on the mountains”.